What are Funko Pop! Vinyls?

The standard Pop! Vinyl figure is 3.75″ tall but some characters/creatures in the Potter/Beasts line are larger/smaller.

What are exclusive Pop! Vinyls?

Specific figures (either unique molds or variations on existing figures) are often exclusive to conventions (like San Diego Comic-Con) or retailers (such as Barnes & Noble). While exclusive, these figures can usually be sourced online (e.g. Amazon/eBay) and through additional pop culture distributors (e.g. Popcultcha). 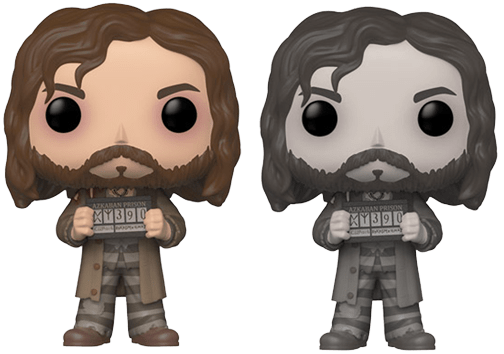 Funko Pop! Vinyl figures are produced with a number of variations:

Variation Glow in the Dark

Like the name suggests, these Pop! Vinyl figures can glow in the dark.

These Pop! Vinyl figures are black and white.

These Pop! Vinyl figures are sold as part of a 3-pack.

Movie Moments depict an iconic scene from the films.

How do I get a chase edition?

Some vendors will sell the chase edition separately, usually at a significantly higher cost. Otherwise, it’s luck of the draw. Good luck!

What is a pre-release figure?

Pre-release figures (like our Horcrux destroying friend Neville Longbottom) are exclusive to a particular retailer (e.g. Barnes & Noble) prior to a general release.

I’m sure I’ve seen other Harry Potter Pop! Vinyls not listed in the checklist?

Well spotted! We’ve cataloged every figure in both the standard Harry Potter and Fantastic Beasts lines, but this doesn’t include figures in other Funko lines with their own numbered chronology. These include non-numbered 3-packs, Rides and Town releases. Never fret, here’s a list of all those additional figures released to date:

How often are new waves of Pop! figures released?

We’re glad you asked! The short answer is we have no idea. For some inexplicable reason Funko skipped #103 in the Harry Potter line. Given the number of figures released since then we can only assume this is a mistake and we’ll never see a #103.

This theory is further boosted by the (annoying) fact that we have two figures released with the number #104: Patronus (Harry Potter) and Buckbeak. (To make things even more confusing there are two Buckbeak variations with the same number: one with orange eyes and another with black eyes.) Confused yet?

I’m looking for a particular Harry Potter or Fantastic Beasts Pop! Vinyl and I can’t find it anywhere!

Get in touch and we’ll try and point you in the right direction 😊.

Where can I find a list of retailer exclusive Pop! Vinyl figures?

How can I make sure I’m buying an authentic Pop!?

Buying Pop! Vinyl figures from reputable websites (Amazon, Popcultcha etc.) and through retailer websites or physical stores is very safe. eBay is generally fine too, but you should be careful when buying rarer figures (like chase editions).

Check the seller’s feedback and be aware of generic stock photography. Look for authentic stickers on the packaging and check for an official stamp on the figure’s foot. This website has a really useful guide to spotting fakes.

Harry Potter Fan Zone is based in Australia 🇦🇺.

All graphics and content on this site are original creations, with the exception of the Pop! Vinyl character glam shots and box art which are the property of Funko (and used only for promotional purposes).